The Miniature Solar car Competition held at Buchan School was a great success with 15 groups of children aged 8- 10 at the start line. Some splendid times were achieved over a distance of 30 metres in spite of the overcast sky. The variety of build was a tribute to the children’s ingenuity. The best of three attempts created a winner. Kate Rotheroe 23.34 secs holds the MENRS Cup for one year.”

The only thing we were concerned about was a sudden improvement in sunshine half way through the event when competitors would be shouting foul! Especially parents.

“Last year’s control was simple, fishing lines on the tarmac at 30 metres, 100 mm high and tight. Two lanes at a time. The start line judges shout: Quiet, ready, go, which judges on the finishing lines hear ∓ press a stop watch. Each competitor is given a unique number which is given to the finishing judge. The finishing judge writes this number with the time in seconds and the judge’s signature. The competitor then brings the result to control where it is displayed on board.”

“Each competitor is given 3 chances of a run and can modify their car between runs to improve their chances. Adults, teachers, experts allowed to assist improvements – sometimes with dubious results. The best individual time is winner.” 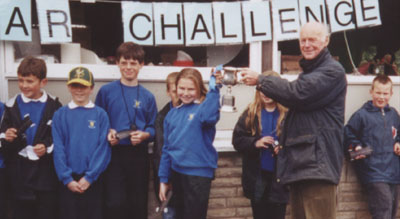 “The winner this last year was an 8 year old girl who keeps the cup etched with her name at home for a year. We give them £5 each for turning up on the day. We are so confident about the children’s skills we are attempting to make it an all-comers event in 2001.”

Criteria for a Car to Travel Straight

How To Guides
Criteria to consider for car to travel straight and fast,